The People’s Climate March In Depth 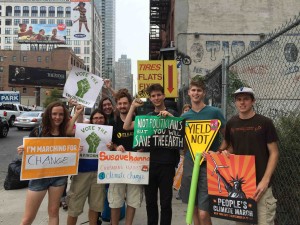 The People’s Climate March In Depth

More than 400,000 people turned out for the People’s Climate March in New York City on Sunday 9/21/14. It was timed to be just 2 days before many of the world’s leaders debated environmental action at the United Nations climate summit, which was also held in the Big Apple.

Advisor Peri Shaw and her good friend John Peterson marched and John took some great photos on his iPhone (previously posted on Nectar news). Also in attendance was advisor Wolfram Hermann and several of his friends representing Woodstock, N.Y.

In fact, the People’s Climate March was a very “Woodstock Generation” event.   Grass roots, intergenerational and a reflection of the “Zeitgeist” of progressive thought.

Secretary-General Ban Ki-moon and former Vice President Al Gore were also there, and more than 550 buses carried in people from around the country.

More than 1,500 groups filled Central Park West before the march. They represented a variety of interests, including the scientific community and religious organizations. More than 50,000 students were there because they were worried about their future, while grandparents came out of concern for their legacy.

It was part of 2646 solidarity events in 162 countries and the largest climate march in history.

At times, it stretched more than 4 miles as marchers carried banners, signs and entire contraptions depicting everything from Mother Earth herself to Noah’s Ark.

It was a truly grass roots, multi-cultural organization which included people of all ages and backgrounds.

Many of the marchers were college students, some with teachers and others on their own. They organized themselves at each college and hired buses to bring them to Manhattan for this historic event.

In the spirit of the Millennial optimism and self-empowerment, these students took to the streets with hand made posters and artwork to educate their elders and others in “denial” or unaware of the dangers of Climate Change.

An example was a group of students from Susquehanna College, a small rural school in Pennsylvania. Many of these students were from the environmental science department and a sustainability committee organized by Laura Spence and others. 25 students pitched in to hire bus and brought posters.

According to Andrew Curtis, a senior with a major in History and an advocate for climate justice and food justice “To take on climate crisis people need to organize. Politicians won’t do it. We need to do it ourselves”. Andrew believes we need more Community gardens in urban areas which healthy grow food , not just flowers . Following graduation in May, he hopes to get a graduate degree in Urban Planning. His friend Adam, a junior and a journalism and Poli Sci major, agreed. Adam even recycled his poster which he found on the street during the march, “ We want to change the world and help it become sustainable for future generations”, he said.

The March was promoted in many ways, including the internet site: http://peoplesclimate.org . With a broad based coalition of supporting groups, there were PSA’s in all forms of media including the NYC subways.

The organization of the March was exemplary and there were no arrests or incidents of violence of any type, a credit to the organizers.

This was in spite of the presence of some radical groups, such as communists and anarchists on the Left, as well as Right Wing US media reporters on the Right. The latter hoped to prove the marchers “hypocrites” by the trash they left behind as well as the resources they used in producing the march.

One right wing newscaster tried to corner Robert F. Kennedy , Jr., founder of Riverwatch, and ask him if he were willing to personally give up his cell phone and his car to achieve “Climate Justice”.

RFK, Jr. deftly responded that such sacrifices might not be required if we could find cleaner and more efficient technologies and had government mandates to prevent “free rider” problems.

The organizers had drawn up and publicized a “Code of Conduct” months before as follows:

To encourage the broadest and most diverse involvement possible, to respect our many communities and the important issues we are supporting, to help create a family-friendly mobilization and to help ensure the safety of all participants, we expect everyone taking part in the People’s Climate March on Sept. 21, 2014 to respect the following agreements:

Two days later, on Tuesday 9/23, at the United Nations Climate Summit, more than 120 world leaders convened for the meeting aimed at galvanizing political will for a new global climate treaty by the end of 2015.

President Obama who spoke at the event pledged to “show the world that the U.S. is leading on climate change” , and called on other leaders to step up to the plate”. President Obama outlined specific ways the global goals could be met and explained that this was something no one country can do alone.

However, a recent study found that the world spewed more carbon dioxide into the atmosphere last year than ever before, primarily driven by China, India and the United States. And the top leaders of China and India failed to attend the Summit.

This is likely the first of many marches and summits which will be required in order to effect meaningful change and help raise people’s awareness of the Climate and resource problems we face on Earth, the real estate on which we all reside and depend on.

All in all, it was an inspiring day and a great day for democracy and hope in the world.

Sustainability is understood as the development that meets the present needs without compromising the capacities of future generations, ensuring the balance between economic growth, environmental care and social welfare. In Sustainability for all we promote the awareness and difussion of good practices that allow to combine economic and social development with the preservation of natural resources.

As you may know, the 17th “Sustainable Development Goal” is “Partnerships for the Goals”. In the spirit of that goal, we are looking for a few good partners to help us organize and launch the first of what will, hopefully, be many, “ Sustainability Festivals”. Our goal is to organize a community of  like-minded people to help educate others about the SDG’s and the need to fight Climate Change.

If you are interested in joining as a sponsor, please apply here and we will be in touch.